My husband strained his latissimus dorsi while working. It got to the point that he couldn’t perform his job properly and had to go to urgent care for help.

At urgent care the doctor gave him two prescriptions: an anti-inflammatory pain reliever Naproxen, and what I would consider an obnoxious amount of prednisone steroid. Due to my chronic illness I have experience with taking Prednisone and was very wary of him taking it and at the dosage prescribed.

I expressed my concerns and he chose to take the pain reliever but not the steroid.

As soon as he called and told me what was going on, I immediately put together a protocol to get him healed up and back in the action. Here is what we did:

-Applied an Essential Oil blend of Frankincense, Spruce, Rosewood and Blue Tansy to feet and to the lower back pain site. 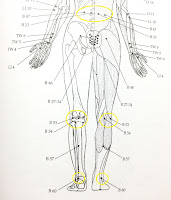 - Applied Ice to the area for 20 minutes

At this point he was mobile and feeling much better. He said he could feel himself relaxing and the pain leaving out of the area.

-Drank Apple Kuzu about 1 hour before going to bed.

The next day we repeated this protocol and added:

By the third day, he was up and going. He returned to work after that with minimal soreness.

By integrating conventional treatment with at-home therapies, the recovery time was much shorter than any of his previous injuries.

Posted by Melinda
Email ThisBlogThis!Share to TwitterShare to FacebookShare to Pinterest

Check Out This Great Book!